Some of you may recall how, in my recent post about the Wasp’s useful and insightful contribution to a discussion in a room otherwise full of men, as I mentioned that they were trying to capture the Human Top, I included this aside:

a villain whom nobody could take seriously until he later changed his name to Whirlwind, and got himself a new costume that didn’t look like he had a giant onion for a head…

Some, however, may not immediately see what’s funny — and dumb — about a supposedly “serious” villain (i.e. not one simply played for laughs) calling himself “The Human Top”. Especially in the case of non-English native speakers (not that I’m one myself, but…). Mainly because “top“, in this context, is a term whose meaning many people won’t know, mostly because 1) it’s already a common word, as the opposite of “bottom“, and 2) its meaning here refers to something that, while centuries old (if not millennia — I’ve just investigated, and it isn’t known), is relatively unseen these days — most people probably grow up without ever seeing one or even hearing it mentioned except perhaps when their parents or grandparents reminisce about the “good old days” and what they played with when they were kids, instead of these new-fangled Nintendos and Playstations.

This, then, is a top, also known as a spinning top: 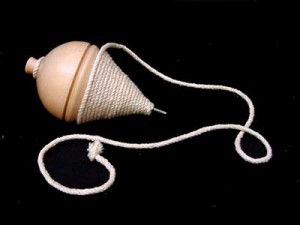 And, since the guy’s power was to spin around very fast, that’s naturally what Stan Lee named him after. 🙂 Lee was a great creator, but from time to time he came up with very dubious names for characters or teams: did you know that his original name for the X-Men, overruled by his publisher, was “the Merry Mutants“? The prosecution rests. 🙂

And, naturally, if a character was called “the Human Top”, it made sense that he looked like a top, right? So, here’s the guy:

Yup. He wore a helmet in the shape of a spinning top. Though, to me, it looks more like an onion. 🙂

What’s interesting is that, as I said, this character was supposed to be serious — indeed, he was Giant-Man’s first foe after he added the “Gi” part to his name (before that, he was simply Ant-Man). And his ability — spinning around at an incredible speed — was actually very powerful and effective: he could move extremely fast, was virtually impossible to grab or hit, could “fly” up simply by spinning very fast in one place, and in one later story, he actually managed to beat Quicksilver, Marvel’s equivalent of the Flash. Not only that, he was one of the most intelligent villains at the time, being both a good planner capable of subtlety, and a quick thinker. But who could ever take seriously a guy named after an old children’s toy and who looked like an onion bulb? 🙂 So, nobody can blame him for later changing his name to Whirlwind, and donning a new costume.

Now, I could tell you about the Trapster, formerly known as Paste-Pot Pete… 🙂

One thought on “What’s so funny about ‘The Human Top’?”