About a week ago, I mentioned that I would be trying out Microsoft’s Bing as my default search engine in my main browser (Firefox 4.0) on my main computer, for at least seven days. So, the week has passed… what are my impressions of Bing, when I had used Google for years? 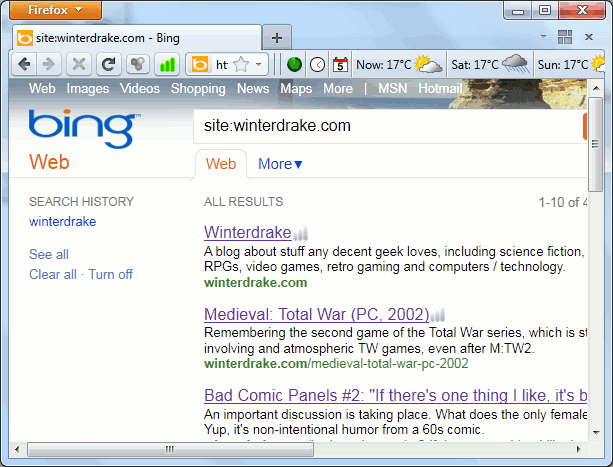 In general, pretty good. Bing’s search results seem to be at least as good as Google’s; during an entire week of heavy internet use, there wasn’t a single time when I couldn’t immediately find anything I wanted using Bing and had to resort to Google. I think this says a lot about the quality of the search engine itself: it really seems to be as good as the world’s most popular search engine.

It’s also very, very fast. Again, both search engines give results almost instantaneously, so nobody will really picking one over another because of speed, but, again, the fact that MS was able to match Google’s near-perfect performance says a lot — especially when you consider that we’re talking here about a company quite infamous, in the past, for making bloated, under-performing and unstable software. 🙂

As I mentioned in the past, Bing actually seems to rate my sites better for most of the keywords I tried. Yes, one can argue that this doesn’t mean that the engine itself is “better”, but, as I said on that post, the queries I used were reasonable, and the pages on my sites were relevant.

Bing seems to have some “intelligence” in indexing, say, WordPress blogs, that Google isn’t showing: for instance, even before I added “noindex” to my category and tag pages in Winterdrake, Bing was already not indexing them, and Google was. It’s arguable whether the search engine deciding these things for itself is a good or bad idea; in this particular case, it’s good (both for SEO and for usefulness to users, it’s better, for a blog, to index only the front page, the posts, and the pages, not categories, tags, date archives, author archives, or anything else), but I can perfectly see how a webmaster wouldn’t like this.

Bing seems slower than Google to index a new site, but, after it “gets going”, it appears as quick to index new content as the big G, if not quicker.

Bing’s Webmaster Tools page has been improving since I first used it several months ago, but it’s still not as good as Google’s, missing several of its features, and its use of Silverlight actually makes it less user-friendly. It’s especially bad on a small screen, such as that of a netbook. Microsoft really should allocate a couple of user interface people to it.

There are some quirks in the Bing user interface I don’t like much. For instance, a typical results page is much more colorful than the Google equivalent, which I find distracting, though I admit that this may just be due to being used to Google, which I have used for many years. Also, when you’re using image search, in Google you can quickly middle-click on several of the results and open new tabs in the background, something I find very useful; in Bing, that doesn’t seem to work well (possibly due to Silverlight?).

In conclusion: if, for some reason, I “had to” use Bing, I wouldn’t mind it at all. It has a few quirks that Google hasn’t, but is actually better in other respects, and in what really matters — search results quality and speed — it’s at least as good as Google. The best praise I can give it is this: during a week of heavy Internet use, I didn’t miss Google at all. I could perfectly live with either search engine without ever “pining” for the other. And, in fact, I think I’ll leave this PC’s Firefox using Bing by default for a while longer, simply because I’m in no rush to switch back.