Do you like “The Lord of the Rings”? Tolkien’s epic, the best known fantasy book in the world? Did you enjoy Peter Jackson’s fantastic movie adaptations? If so, isn’t the idea of living the epic, even if “just” in a video game, tempting?

If you want to re-live the movies, the best choice is Electronic Arts’ two games, “The Two Towers”, and, especially, “Return of the King”. They’re fantastic, whether on a console or on the PC ((this section was originally written in 2005; while those two games are still excellent, they probably won’t look as good 6 years later, with their “PS2-era” graphics, even on the PC. Another more recent choice is The Lord of the Rings Online, but that’s a different kind of game.)). But they’re movie adaptations – basically, you “play” the movies’ main battles, with the movies’ looks, the movies’ music, and the movies’ actors doing the voices. Those two are great action games, I’m not trying to diminish them in any way. Other excellent movie-licensed adaptations include the RTSs Battle for Middle Earth I and II — Christopher Lee and Ian McKellen are especially wonderful in the first one).

But if you want to re-live the books… 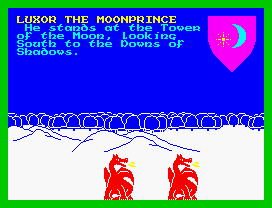 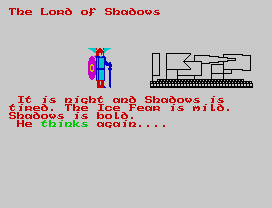 … there’s probably not a better choice than Mike Singleton’s 1984 classic, The Lords of Midnight.

Nope, it’s not “Tolkien-licensed”. It’s not an official LotR adaptation in any way, though the inspiration is obvious. And Mike (formerly an English teacher) actually wrote a short novella, which was included with the game, and was a joy to read.

But the game, a mix of adventure and strategy, was, 27 years ago, and is, right now, the best way to re-live Lord of the Rings — not an exploration of Middle Earth, not a meeting with Tolkien’s characters, but, instead, what Gandalf — who orchestrated the entire strategy — must have felt, and the challenges he had to meet.

Lords of Midnight is the perfect, still unequaled blend of grand strategy – defeating, or stopping, or at least delaying the Dark Lord’s seemingly endless armies by force of arms – with high adventure – a heroic quest of a brave hero who attempts, without an army behind him, using only stealth and courage, to destroy the Dark Lord’s main source of power – which, obviously, can only be done deep inside the Dark Lord’s territory. Sounds familiar, doesn’t it?

And that’s the beauty of the game: you control both lords with armies — think Aragorn, Théoden and such –, though you start with none and must recruit them, and individuals such as Morkin (the equivalent of Frodo, though here he’s really incorruptible, unlike everyone else), and other recruitable characters such as Fawkrin the Skulkrin (who would be the Gollum-equivalent) and Farflame the Dragonlord (an actual dragon, who moves faster than everyone else in the game and can easily, when rested, crush a 300- or 400-man army in one night, but can’t recruit troops). There’s also a complex hierarchy of “can-be-recruited-by” (which would get even more detailed in the sequel), which means that some lords can be recruited only by a couple of characters in the entire game. A LoM game is never short, unless you purposely screw things up, but it’s also never a forgettable experience. In your first few games you will really feel despair, because Doomdark’s (the Sauron-equivalent) armies seem endless (they aren’t), and recruiting a large enough number of lords to make a difference is far from easy. And your other option, Morkin’s quest, is virtually doomed to failure unless you put up enough of a military challenge to Doomdark to distract him ((which, you’ll note, once again parallels The Lord of the Rings…)).

Really, play this game. There’s a reason why it still has an active community, with enhancements, remakes, multi-player versions and so on… after 27 years. By the way, the fact that the game isn’t played in real-time and doesn’t require precise controls makes it better than most other old games for playing (emulated) on a mobile phone.