I’ve read a lot of Englehart’s Marvel stuff in the past, including, of course, his runs on Avengers and Defenders, but this is my first time reading this: 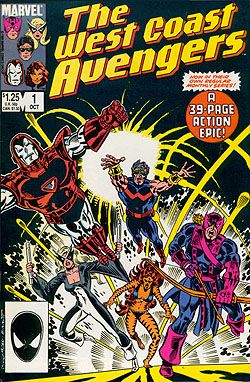 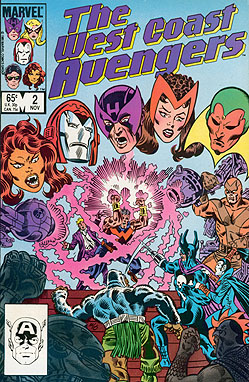 Loving it so far; it’s far more “crazy” than most superhero group books (though it’s not really a “humor” book the likes of Giffen and DeMatteis’ JLA), and both the characters and their characterization are great; it’s the first time I found the Grim Reaper (Wonder Man’s brother) interesting; I always groaned every time I saw him on a cover, since, to me, he was a boring villain with boring powers ((he was a normal human who carried a technologically advanced weapon in the form of a scythe — thus the name –, which had powers as the plot required and therefore he would always defeat all the Avengers single-handedly, until the last page or so where something would conspire to defeat him)) and a boring motivation ((“you let my brother die! no, wait, you defiled my brother’s memory by having an android around with his brain patterns! no, wait, my brother is back, but he’s not exactly like my mental image of him, therefore it’s not really him and you’re mocking his memory again! no, wait…”))). It also seems to be subtly much more “mature” than most mainstream comics of its era; in fact, I’m surprised that Marvel let Englehart do all he did just in the first 5 or so issues (one word: Tigra). According to Englehart, there was indeed editorial interference (including rewriting his dialogue), but that was at the end of his run (and a good reason as any other to leave a book, I guess), which is still more than 30 issues from now.

Anyway, highly recommended; it’s the kind of “laid back” comics you don’t see these days (where everything must be deadly serious! The end of the world! A crisis!)