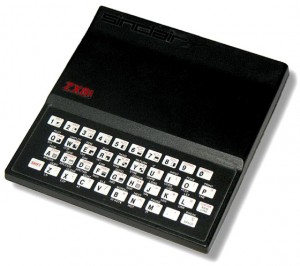 I never had a “real” ZX81; in Portugal, as in the US, we mostly got the Timex/Sinclair official clones. The Timex/Sinclair 1000 looked exactly like the ZX81, pictured above, except of course for the logos, and it had 2KB of RAM instead of 1KB. Yes, KB, not MB or GB. In other words, it could have two screens full of text (with a large font) instead of one. Heaven! 🙂

But that wasn’t the one I had, either. What I had was this beauty: 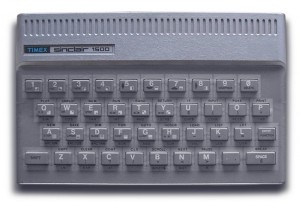 Meet the Timex/Sinclair 1500. It’s basically the ZX81 with a ZX Spectrum case and keyboard (including the rubber keys), but in grey instead of black, and with the 16KB “massive add-on memory” on the inside (thus, no more frequent crashes; the original, external expansion for the ZX81 was notorious for being badly connected to it and crashing the computer if you so much as sneezed at it).

This was my real first computer, ever, in 1984, at the age of 10. I had already played with a ZX Spectrum 48K for a year or so, but that one was my father’s, and he was famous at the time for sadistically 🙂 inventing the flimsiest excuses for not allowing me to use it (“it’s bad for your eyes!”, “you’re just playing stupid shooting games!”, “you should get out more!” (that one was true, to an extent), “I want to watch two TV channels at the same time, so there are no free TVs”, or simply “because I say so”). Besides, I only went to my father’s place in the weekends, and so I asked my mother’s side of the family (which I lived with) to please please please buy me a computer. Any computer. The Spectrum was already the most popular computer in Portugal back then, but it was too expensive, so the Timex/Sinclair 1500 was the choice I decided on; I seem to remember that it cost the equivalent of €300 today.

Now, bear in mind that, even then, this wasn’t exactly a powerful machine: a 3.25Mhz CPU, 16KB RAM (massive!), absolutely no color, no sound, and a 64×44 graphics resolution. You’re probably not really picturing that resolution right now 🙂 , so… want to see what a game looked like? (I had this one, Frogger, bought on tape, by the way)

Ignore the music, the video’s author added it himself. The ZX81, as I said, was completely silent.

Well, as you can see, games on the ZX81 / Timex weren’t exactly state of the art (though there are some classics there, such as 3D Monster Maze and Mazogs, which I never knew at the time). Remember that, as I said, the ZX81 was already relatively obsolete at the time; the Spectrum (with color and sound, and with eventually thousands of games) had been out for more than a year. So, what could I do with it?

I never really got into machine code / Assembly, but for more than a year (until I got my first Spectrum clone, the TC2048 — but that’s another story…) I spent most of my free time exploring what I could do in BASIC. From simple (but fun) games to utilities and just weird experiments, it was a time of discovery, exploration and, well, fun. I knew absolutely no one else at the time who could program, so it was fun to show the other kids at school my programs and games, too. But, most of all, the constant exploration, the intellectual challenges, the fact that I need to create everything because there was almost no software at all for it (I think I only purchased about 5 or 6 games, on cassette; not that there were many more available — the Speccy was the big thing, remember?)… it was really a unique year for me, and one I came to miss in the years to come (since the Spectrum had great games, I became much more of a consumer than an inventor (if I may use such a term) when I finally got one).

I really miss that year, even these days. Yes, nothing prevents me from programming and inventing stuff these days, but it’s simply not the same thing, not at all. Those were simpler times: just me, a 16KB black-and-white computer, and a BASIC manual. And, somehow, I don’t think I’ve ever recaptured that simple fun. Maybe one of these days I’ll play around with an emulator, and get myself re-acquainted with Sinclair BASIC, just for the hell of it. 🙂