Ah, Reed Richards. Few characters have been as consistently portrayed as sexist, in mainstream superhero comics. It’s probably because he and Sue were one of the first “real” couples in superhero comics: they were already dating in the very first issue, and were married in the third annual (1965). Therefore, all the “morals” of the late 50s and early 60s could be seen in their relationship; other couples typically came much later, and the moral zeitgeist had, by then, progressed.

Here we see another great example: Reed (and he isn’t depicted negatively, therefore Stan Lee seemed to agree, at the time) treats Sue as if he was a parental figure (instead of a boyfriend, which he was at the time), and insults her entire gender by saying that women are “too scatterbrained and emotional to realize” how, basically, men know best. In other words, according to this view, women should look up to men, including steady boyfriends and husbands, in much the same way as children look up to their parents, trust them implicitly, and obey them, because parents are adults and are, therefore, the only ones who can be rational and responsible.

And what’s worse is that, in the next panel… Sue agrees! Even though she challenged Reed in the previous panel (with, you’ll note, a childish retort: “go polish a test tube or something!”), after she leaves she admits to herself that Reed was right, that he really knew what’s best for her, and that she — like all women — only didn’t accept it at the time because she’s “too scatterbrained and emotional”.

The early 60s, ladies and gentlemen! 🙂

Since the Anti-Communism entries in the Bad Comic Panel series have, so far, been about the Soviet Union, I thought that such a “monopoly” would be unfair to our Chinese friends in the 1960s, who have been ignored so far. This, then, is the first of several panels I have already chosen to show that, when it came to crude anti-Communism, Stan Lee and Marvel were equal opportunity stereotypists. 🙂

The panel above shows four fearful Chinese military officers who have been sent to negotiate with the Mandarin, who, interestingly, was a Chinese super-villain but not a Communist; his demeanour and trappings were all from imperial China (at least, as seen by westerners in the 60s). We’ll be seeing more of the four — and the Mandarin himself — in the near future. Meanwhile, I couldn’t be compiling this list and not include such a delicious quote as “Our Communist overlords will slay us if we fail in our mission” — or, translation, Communist leaders are evil (hey, but aren’t you “commies” as well?) and regularly kill underlings for failing. Then again, that comes straight from the official Evil Overlord manual, doesn’t it?

Unlike other entries in the Bad Comic Panels series, this one’s main quote is from an actual historical figure. I really love how the morally simplistic comics of the 60s (and earlier) depicted their opponents — such as Communists, in this case — as “hi, I’m evil!” card-carrying villains. 🙂 In this particular case, we have a dictator describing himself as such — which is rarer than you might think.

Other things to appreciate here:

I could have stretched this one into two separate posts, but since they would both concern the very same character (again, much like Karl Kort, never seen again after this story, sadly), and are from the same story, I chose to do a “two-in-one” with the best / worst two panels featuring this fascinating “yellow peril” villain, General Fang, featured in The Incredible Hulk #5, from 1962.

The first is after the Hulk, disguised as the Abominable Snowman (don’t ask), had destroyed a few of Fang’s tanks and weapons. Naturally, his men are worried:

But Fang, reminding me of a couple of bosses I had in the past, knows how to deal with those pesky outside contributions. I bet the other guy, the one with the simian look and the ridiculous huge bowl with a star, will not ever think, in the future, of offering the slightest suggestion to his most glorious general!

The next panel comes a bit later in the story, after Fang has ordered the launch of his missiles into the peaceful neighboring country of “Llhasa”, which is of course not meant to be Tibet (whose real-life capital is “Lhasa”, with just one “L”), perish the thought.

As the caption in the panel says, the Hulk stops the missiles, but Fang doesn’t know that yet, and so he orders his cavalry (just the right choice for attacking snow-covered mountains, I guess) to attack, and to “strike terror to those who were foolish enough to survive (his) missile attack“.

Because, when General Fang attacks your country, to even survive is but mere foolishness. Makes sense. 🙂 I must use this phrase more often… 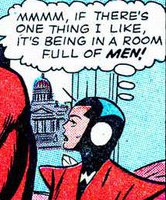